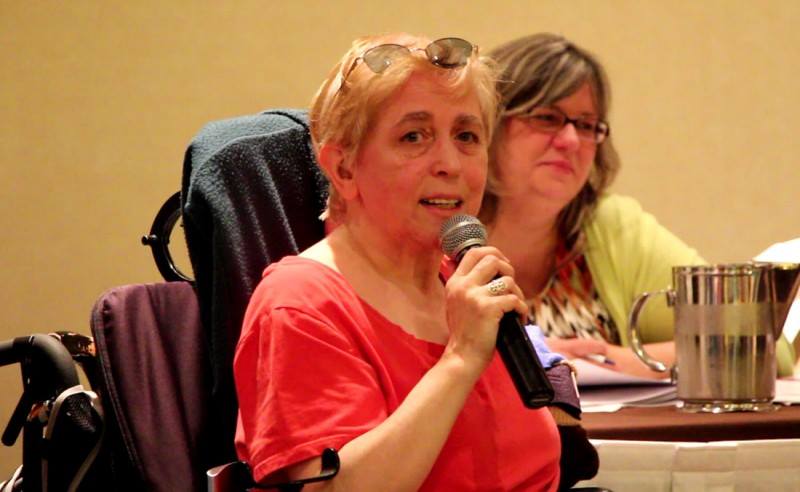 October is Women’s History Month, a time selected by Status of Women Canada to celebrate all women, and an opportunity to celebrate great pioneers and their achievements.

This year DAWN Canada is celebrating the legacy of one of the great women who in her own way, shaped both the disability and women’s movements - Maria Barile (1953-2013).

Maria used her voice and, in particular, her pen to remove many barriers. Her work and commitment, for more than 30 years, had considerable impact on the advancement of these two often vulnerable groups, both in Quebec and across Canada.

Upon her arrived in Quebec in 1963, at the age of 11, Maria Barile understood that she had to chart her own course and that nothing would be easy for her. She was in many ways a role model who demonstrated that disability should not limit a person’s ambition and achievement. Through her example and advocacy, she changed the lives of hundreds of women with disabilities.

Sujata Dey, responsible for the international trade campaign at the Council of Canadians, described her impact: “Thanks to Maria, hundreds of women with disabilities continue to work. She was the one who supported and inspired them. Thanks to Maria, disability organizations, and state agencies have had to pay more attention to the needs of women with disabilities. Thanks to Maria, girls today can live full lives with their disability, without apologizing. When a woman or a girl with a disability is abused, in an institution or in her family, she now has more of a chance to be heard and better services than she would have had before. Maria was a real catalyst for social change.”

By speaking out boldly against all forms of violence and discrimination against persons with disabilities, especially women, Maria contributed greatly to breaking the silence on this issue. Violence and abuse, including systemic violence was something that she could not ignore. She made it the focus of work and spared no effort in trying to end it. She was one of the first people to say that the security of women with disabilities was dependent on their access to education and their ability to gain financial autonomy. She was an indisputable icon in the struggle for the rights of women and people with disabilities in Quebec and Canada.

Maria Barile held a Master's degree in Social Sciences. Being passionate about social justice and a great defender of rights, it was clear to her that specializing in social work would enable her to better serve her community and the larger society by working with poor and vulnerable populations.

Maria was a genuine advocate for change. Beginning in the 1980s, she was actively involved in various advocacy movements and also in many actions that resulted in positive social change. She started Dawson College's first support group for students with disabilities. She did not wait for the environment to be made accessible; she herself created a suitable and inclusive environment.

"Social change is not achieved by following the same structures that exclude people, but rather by replacing them with more egalitarian structures." Maria Barile

Maria was at the forefront in her activism and in the struggle for human rights. It is not surprising then that she was one of the founders of DAWN Canada and subsequently the Action des femmes handicapées de Montréal (AFHM). She also co-founded and co-directed ADAPTECH, a research lab on adapted technology and education, where was one of the most active researchers.

Maria Barile liked to say that she became an activist on the day the MacKay Center (School for the Deaf) told her, at the age of 21, that she had reached her schooling limit. She decided then to continue her secondary studies by correspondence. This period marked the beginning of a long and unusual career, often interspersed with small victories, great challenges, and many obstacles, and accompanied by her great determination that  had a great impact on so many.

“Firstly Maria was a fighter. We recognized ourselves in her. We wanted to work with her to carry out projects so that women with disabilities could feel included in society,” said Louise Baron, Advisor at Action Autonomie.

Ultimately, Maria Barile should be seen as a leader, a trailblazer. It is important that we remember her, but especially important that we continue along the path she paved by adding our voices and our actions in support of the issues she fought for. Her legacy is for all those who believe in social justice, free and full citizen participation and social and economic inclusion for all. Her memory inspires women with disabilities to persevere and fight. It serves also as an inexhaustible source of courage.