Coping with disability by connecting to culture

Coping with disability by connecting to culture
by Deseray Rich 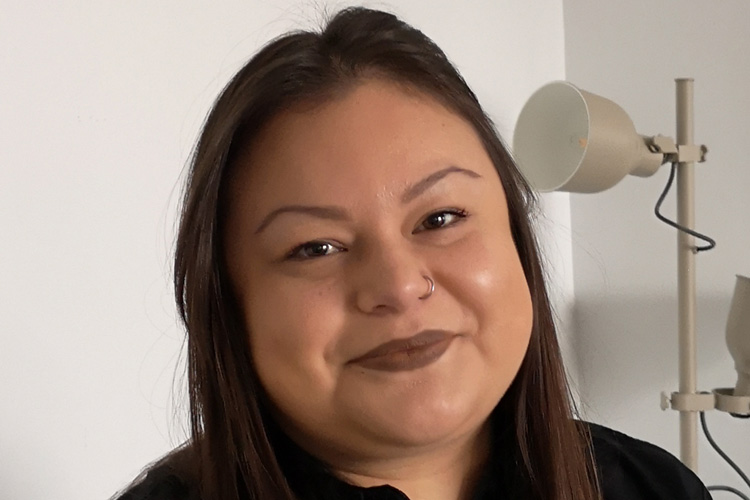 My name is Deseray, and I am Innu and Inuk. I grew up in a small town in Labrador. I wasn’t raised by my parents, I was taken as a baby and raised by my Great Grandparents until they passed away. Then I was in the system during my teenage years. I had an unstable upbringing during the years in the system and this is what I believe contributed to one of my disabilities. I live with Depression/Anxiety and also Type 2 Diabetes.

During college years, I was diagnosed with Social Anxiety Disorder and Depression. It was very devastating and shocking for me, because it was the first time having suicide attempts in my life. I was in shock that I even thought about it. After the attempt, I knew I needed help. I was already on a list to see a counsellor for several months, but I needed help right away. I set up an appointment with a doctor to talk about medication. I never been on any type of medication before, so this was new to me. Unfortunately this Doctor was not very good with mental health issues, so he prescribed me Ativans to take everyday for my social anxiety, which made things worse. Ativan are only supposed to be used for short term use, and I was taking them almost every day just to feel normal in front of people. After a while I felt like a zombie and had another suicide attempt. I changed my doctor who was recommended by a close friend of mine, and he put me on an antidepressant which helped me almost immediately. I felt so much better and felt like I could be myself again. I pushed on, I had support- I just needed to reach out and that part was hard. After weeks in bed and not wanting to deal with life or people, I still managed to finish college and get my Diploma in Criminology. The accomplishment was hard, and I struggled like I never did before, but I did it. And I was so proud of myself.

Years ahead, I did have relapses with depression, and still do. But I manage my social anxiety a lot better. Sometimes I still sleep for a week at a time and can’t get out of bed to do regular daily things, but I get back up and somehow find strength to keep on living because I do love life, and I want to live. But with depression and anxiety, it’s sometimes hard to have hope and love myself. I have a lot of traumas in my life, but I still enjoy life and hold down an amazing job that I love.

In 2017, I was diagnosed with Type 2 Diabetes. It was quite a shock for me, and played a role on my mental health as well. While being depressed, I would often order takeout and avoid cooking. I would often eat bad foods and I think this contributed to it. I was put on medication called “Metformin,” and two other medications for my kidneys and high cholesterol. Type 2 Diabetes is a chronic illness and I will live with this for the rest of my life, but it can be controlled. I do eat well often, but when I relapse into a depression, I often eat poorly because I can’t do the normal things I would do daily, such as cook and take my medications on time. During a depression, I often sleep through the day and take my medication late, which makes things worse. Having depression/anxiety and diabetes is really tough, but I manage. And I try not to be too hard on myself, because I know these illnesses are not easy to live with, and others struggle with this as well.

How do I cope with these disabilities? I have a therapist, who I enjoy talking to. I mostly talk about my daily struggles and plans for the future. I also practice my culture, and traditions. Connecting with my culture has helped me in so many ways. I have found my identity, as Innu and Inuk. I practice smudging, which is a ceremony of burning sage and I have my own Eagle Feather- which was gifted to me by a close friend of mine. I also enjoy beading earrings, being in nature, and learning the Inuktituk language. I am in an online language class run by Native Montreal.

My advice to anyone who struggles with either of these disabilities or both, keep going, and reach out. Connect to your culture, and never be hard on yourself. You are important, and worthy.

Deseray Rich is an Innu and Inuk advocate for Indigenous rights and social justice.