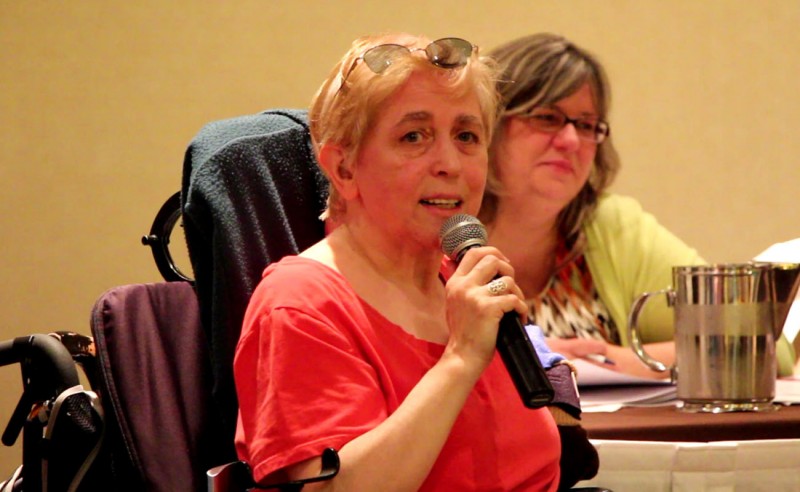 Two years ago today we lost one of our Founders and one of the most important feminist-disability activists in Canada in Maria Barile.

Maria was ahead of her time in her vision of disability rights activism. We cannot achieve social change by using the same structures that exclude people. Rather, it can be achieved by replacing these, with more egalitarian structures

Among the concrete changes she made were co-founding the DisAbled Womens Network of Canada  DAWN-RAFH Canada  as well as being a co-founder of Action des femmes handicapées (Montréal) two institutions by and for women with disabilities to which she was passionately dedicated.

Maria has said: The lesson learned from living with many barriers is that the impossible is possible if you look for other ways to achieve your goals. This is what she aimed to do her entire life through her active involvement in projects linked to innovations in assistive technologies, universal design and the concept of inclusion practice. Maria was a strong supporter of equal access to education and information for people with disabilities. She always advocated for the autonomy and empowerment of women with disabilities through access to knowledge, education and information.

ABOUT THE CENTENNIAL FLAME: http://laws-lois.justice.gc.ca/eng/acts/C-27.5/page-1.html

About the Centennial  Flame Award 2014 and International  Day of Persons with Disabilities December 3, 2015

The Standing Committee on Human Resources, Skills and Social Development and the Status of Persons with Disabilities, chose, on Tuesday, December 9, 2014, our very own Selma Kouidri, Inclusion Coordinator for Quebec here at DAWN-RAFH Canada as the recipient of the 2014 Centennial Flame Research Award.

Ms. Kouidris research will explore the legacy of Maria Barile  A retrospective of her rich contributions to Canadian  Human Rights.  Ms. Kouidri plans to document the work that Maria did in the many national, provincial and community organizations that she founded, her contributions to education, her many important articles, papers and scholarly works.