Where and when there is injustice, it is important that we call it out, confront it. Where there is the mistreatment of another human being and a violation of their basic human rights, let us not ignore it. 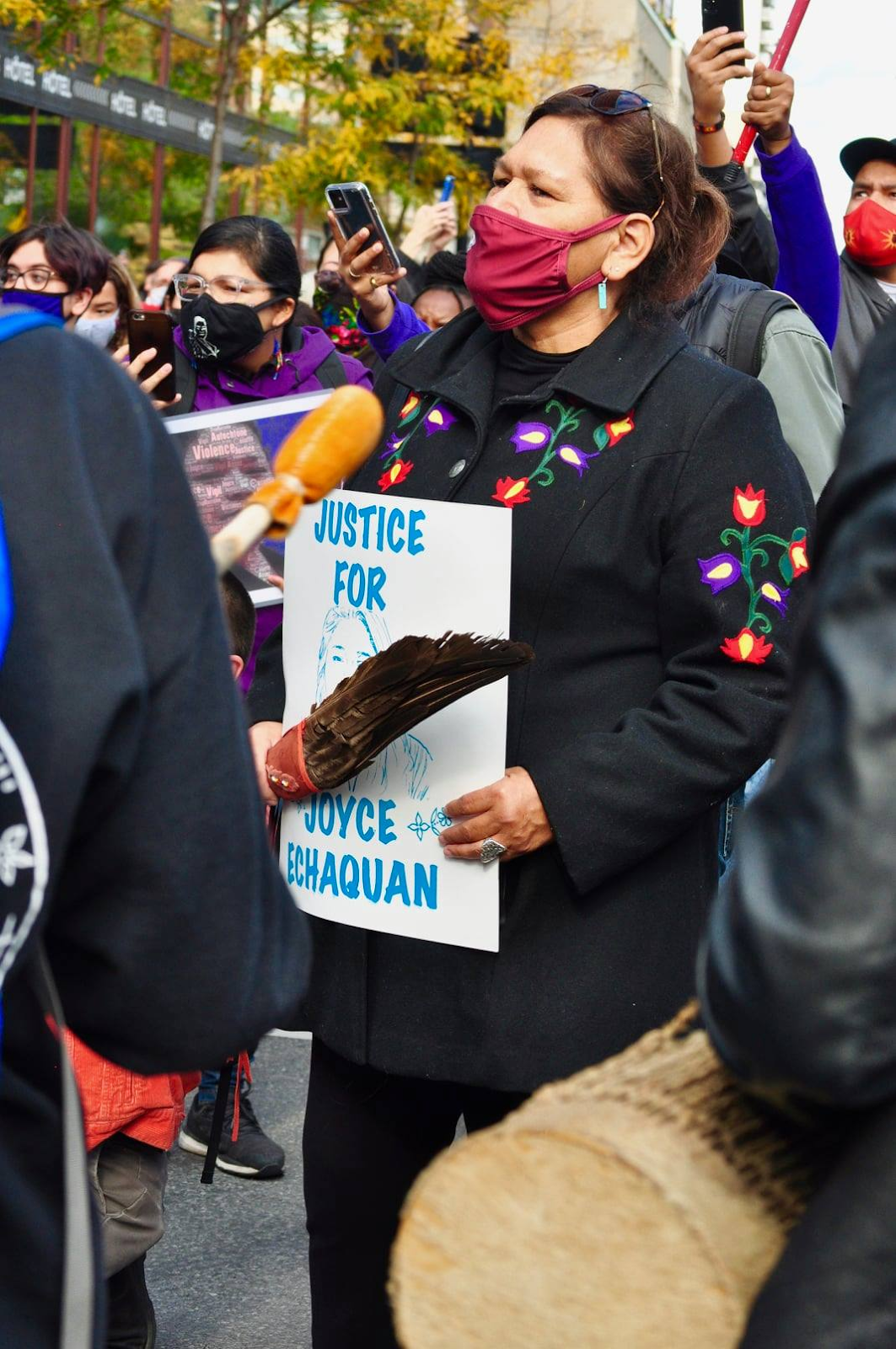 Joyce Echaquan, a 37-year-old Atikamekw woman and mother of seven, died Monday September 28, 2020 after being admitted to the Joliette hospital for stomach pain two days prior. Before her death, she managed to start a Facebook Live video that captured nursing staff uttering vitriolic and racist slurs. One of the nurses, supposedly there to care for Joyce, was recorded saying “this is better dead” as Joyce winced in pain next to her.

Joyce Echaquan had chronic cardiac health issues and as such had a pacemaker. She also knew she should not be given morphine as she was allergic to morphine as stated in her medical record and on the allergy bracelet she was wearing. Nonetheless, the medical staff still injected her with a mixture of morphine (an analgesic drug) and Ativan (an anxiolytic drug). In the moments before her death, Joyce is heard saying in Atikamekw via her Facebook Live recording, "Get me out of here, because they are giving me a lot of medicine."

Our hearts break for the family, friends and community of Joyce Echaquan.

Unfortunately, time and again, Indigenous women with disabilities are often dismissed and not taken seriously by medical professionals. At the intersections of systemic racism, ableism, sexism, and ongoing colonialism, the medical industrial complex is deadly for many Indigenous people.

Last year, the Public Inquiry Commission on relations between Indigenous Peoples and certain public services in Québec released a report in which Judge and Commissioner Jacques Viens concluded that “it seems impossible to deny the systemic discrimination suffered by First Nations and Inuit peoples in their relations with the public services investigated." Commissioner Viens also writes in the report that in light of numerous citizen testimonies, prejudices against Indigenous peoples remain very widespread in the interaction between caregivers and patients. The Viens Commission has 142 calls to action; among them is the call for Indigenous people to feel culturally safe when accessing public services.

Even though one nurse and an orderly at Joliette Hospital have since been fired, and three investigations and a public inquiry have been launched, this is not enough. Quebec Premier François Legault’s reaction to Joyce’s death makes it seem like the nurses and orderly in this instance were just “bad apples” in the system. Legault’s refusal to acknowledge anti-Indigenous systemic racism and discrimation puts Indigenous women with disabilities at even more risk, and not just in the medical system. Anti-Indigenous racism permeates in daily life and leads more broadly to housing, education, job, food and water-related discrimations, instability and insecurity, as well as gender-based violence in the form of increasing numbers of missing and murdered Indigenous women. It is unacceptable that the right to live with dignity is not conferred to everyone equally. As stated by Quebec Native Women, the Legault government must act now to officially recognize systemic racism as an issue across Quebec.

Anti-Indigenous systemic racism is a problem across Canada. As stated in the report titled Ignored to Death: Systemic Racism in the Canadian Healthcare System:

“Racist discourses permeate Canadian society, including in the consciousness of nurses, doctors, social workers, unit clerks, and receptionists. Many settler Canadians continue to believe the myth that ill health, disease, injury and death are often one’s own fault. There is little understanding of the social determinants of health and the role that the history of colonization, cultural oppression, socioeconomic disparities, discrimination, racism, and Western organizational culture have on Indigenous peoples’ health.”

Let’s say her name again: Joyce Echaquan. In the words of her partner, Carol Dubé, “There is no human being that deserves to die with indignity, with humiliation, and in fear.”

Let’s all demand #JusticeforJoyce and the end of systemic racism. Solidarity is an ongoing process and it is only meaningful if backed up by substantive actions that are not performative in nature. DAWN Canada as well as the larger disability community are not doing enough to center Indigenous women with disabilties in our activism. We collectively have a lot of learning and unlearning to do and it is our responsibility to be better co-resistors in the fight against oppressions that Indigenous women with disabilities face.

More ways to help the family, the Atikamekw nation and resources to learn about colonization and anti-Indigenous racism in Canada and Quebec:

To support and know more about the Atikamekw of Manawan:

The Public Inquiry Commission on relations between Indigenous Peoples and certain public services in Québec: listening, reconciliation and progress

Ignored to Death: Systemic Racism in the Canadian Healthcare System