Bearing witness for all generations: Truth, reconciliation, and Pope Francis’ pilgrimage of penance 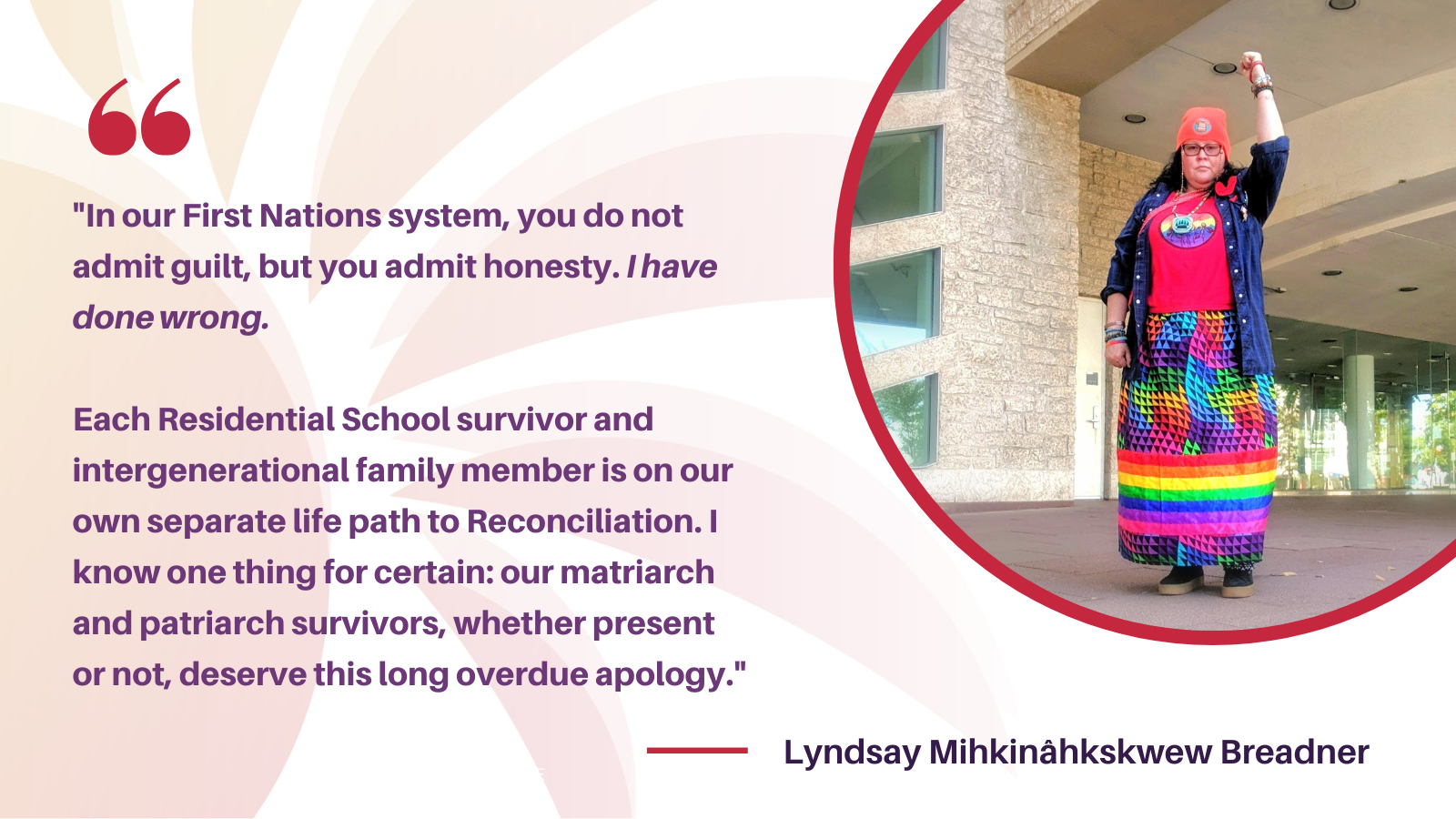 September 30 marks the National Day for Truth and Reconciliation.

In Ojibwe, our closest word for justice is Ti-bag-nee-qwawin. Literally translated, it means "To come before a system for something that has already been done wrong." (In this case, "system" is a reference to the Euro-Canadian system of law.)

In Kanien'kehaka Mohawk, the closest word that we have for justice is one that means, "It is fitting."

Blackfoot also doesn’t have a word for justice. Blackfoot Nation member Professor Leroy Little Bear of the Native American Studies Department at the University of Lethbridge says, "Justice is not a concept but a process."

In our First Nations system, you do not admit guilt, but you admit honesty. "I have done wrong."

On Monday, July 25, 2022, the Pope, in his first public address on North Turtle Island, gave an overdue apology that many Residential School survivors and families waited fifty years for. This is hopefully only the first step.

I purposed anama'aawin kâkîsimowin ohen:ton karikwatehkwen, fasted and prayed for six days during Pope Francis’ ‘pilgrimage of penance.’ I bore witness on behalf of my two predeceased matriarchs: My koo koo Priscilla Irene Quewezance and her firstborn eldest daughter Aunt Margaret, who were were the last Quewezance-Leclaires to be forced to attend Residential Schools in North Turtle Island. My koo koo had six of her children apprehended during the 60s Scoop from Swan River, Manitoba, including my birth mother.

The night before the mass, I packed my backpack with my Raven Wing and Owl feathers, Deer antler, Rabbit Smudge fan, and all four Sacred hoop medicines, bringing enough Sweetgrass, Cedar, Buffalo sage and asemaa (tobacco) if any families and survivors needed it.

My oskapêw sister Jessica Dion accompanied me for moral and emotional support, and we arrived at the stadium early to get painstakingly screened by security. How propitious, that all my bundle items were permitted, from my abalone shell to wooden matches.

Before the mass, informative interviews with guests were streamed, such as with Evelyn Korkmaz, a St. Anne's Residential School survivor and co-founder of Advocates for Clergy Trauma Survivors Canada. Evelyn is the second of four Indigenous mentors and Residential School survivor advocates whom I aim to one day gift asemaa as a personal show of gratitude for my late koo koo and my late aunty.

I was honoured to sit beside Kathy and Anne, two sisters who are Residential School survivors from the community of Fort Smith near Yellowknife. They told me how the nuns in the school didn't address all their classmates by name, and instead hailed them by numbers. The nuns only called them "20" and "21" every day and night. How dehumanizing.

As Pope Francis read Eucharistic Latin interspersed with translators, this mass re-victimized us survivors and our three to four generations present, accompanying our matriarchs and patriarchs who survived this genocide. I heard a whispered echo resound from under hard breaths, wept sighs in the vicinity of our bereaved families and survivors. How broken hearts catch their breaths while silent tears flow.

Redundant and hollow, this mass was as pretentious as the church that robbed us survivors of any and all relationships with our grandparents and elders. We wondered how the Pope and his team could be this tone deaf and insensitive to all the survivors present and those representing loved ones posthumously.

So I wept and let myself feel Kathy and Anne’s pain, mourning along with my koo koo Priscilla Irene Quewezance and aunty Margaret Masney, their disappointment and indignation how the Pope and his team could not read the room for the six days of his pilgrimage. I anama'aawin all the elders who felt this sermon like burn victims suffer through an Escharotomy1 .

At brief pause as we heard the Eucharistic prayer delivered in Latin, Jessica roused to shout “RESCIND THE DOCTRINE OF DISCOVERY!”

After the mass, I had an opportunity to gift tobacco to Ogimaa Phil Fontaine. The line-up for Chief Fontaine was as long as the aisle we had for smudge. Encouraged and centred by my Sacred Firekeeper sister Jessica, it felt truly cathartic to speak in Ojibwe, and introduce and thank you miigwetch for my koo koo, my aunty, all my children and any chapans (great-grandchildren/great-grandparents).

Each Residential School survivor and intergenerational family member is on our own separate life path to Reconciliation. I know one thing for certain: our matriarch and patriarch survivors, whether present or not, deserve this long overdue apology. I went to this open air mass for five loved ones, ultimately: my three Métis children, my koo koo, and my aunty.

Pope Francis said an important process would be forthcoming to conduct a "serious investigation into the facts of what took place in the past and to assist the survivors of the residential schools to experience healing from the traumas they suffered." However, the Pope stopped short of naming any concrete actions.

If Pope Francis, Catholic churches and the Vatican could do three things as part of the TRC’s 94 Calls to Action, it would be these:

1.    Rescind the Doctrine of Discovery.

2.    Ensure that every predator among the Catholic clergy, from nuns and priests to bishops and cardinals, face consequences of their crimes of genocide and sexual, psychological, spiritual and physical abuse upon innocent Indigenous children at every Catholic-run Residential School. And don't relocate these perpetrators to continue to make more victims of their abuse, which makes the church complicit.

3.    Set funds out of their coffers and savings accounts. Respect the human agency and dignity of thousands of Residential School survivors to help provide unlimited mental health and medical resources to support our recovery, healing and therapy.

I put asemaa down for the Catholic Church and Pope Francis to do decent work in restorative justice. I am grateful that the church and the Pope will generously provide all supports and resources to our Residential School survivors, their bereaved communities and their families.

I can only speak of my own personal recovery and concerted efforts to keep on my path to Reconciliation. I realize it is up to each of us First Nations, Métis, Inuit and non-status Indigenous survivors of North Turtle Island to take up these venues, make ourselves visible, and raise our voices for those like my koo koo and aunty, along with all their classmates who never got to safely return home to their parents, grandparents and loved ones.

1 Incision into a burn eschar in order to lessen its pull on the surrounding tissue.

Lyndsay Mihkinâhkskwew Breadner (they/she/he) is a non-binary, Two-spirit, QTBIPOC, neurodivergent, Anishnaabe Sacred Firekeeper oskapéw Oshkaabewi living in Amiskwaciwâskahikan (Edmonton) Treaty 6. Lyndsay has sat on the DAWN Canada Board of Directors as the Indigenous Representative since April 2021.

Lyndsay is a committed advocate for Sixties Scoop and Residential School survivors, missing and murdered Indigenous women and girls, two-spirit people, QTBIPOC and neurodivergent people. She is also a Jordan’s Principle advocate and literacy advocate.

Lyndsay has been a Board member of the End Poverty Edmonton Indigenous Circle (IC) for four years and was a volunteer at Edmonton’s Canadian Native Friendship Centre.

Lyndsay is a full-time caregiver to two adult Métis children who are neurodivergent, and raised three children alongside her late life partner of 31 years.